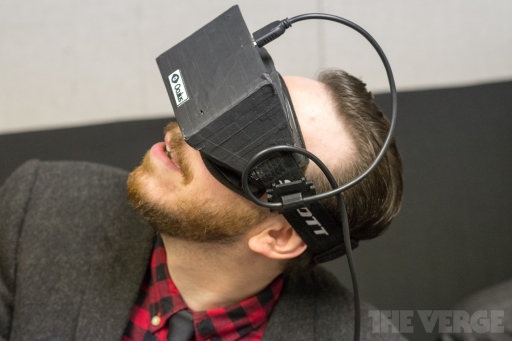 The problem with innovation in the gaming industry is the lack of innovation in the right direction. The Oculus Rift VR headset clearly isn’t solving a problem that needs to be solved at the moment, and we certainly could be moving in a better direction in terms of closing existing immersion gaps.

This reminds me of the Pepsi Challenge error. Good in an initial dose, but terrible in the long run and in practice.

There is a reason no other visual art forms have evolved to the point where they are trying to take over your physical reality, because taking over someone’s reality doesn’t start visually, it starts emotionally and intellectually. For all its marketing push, 3D has yet to catch on with the masses. For all its initial “wow”, 5.1 and 7.1 setups have practically the same affectation as a good pair of headphones. It’s the unstable top down approach to an art form in its infancy.The problem with gaming input is something I like to call control friction, and the relative lack of it on high end machines is the saving grace of the PC platform, and the spawn of all “keyboard and mouse are superior to the controller” arguments.The reason people feel so passionately about PC gaming is not the horsepower or controls, it’s the frictionless immersion.What I mean by frictionless is the narrowing of the gap between the thought of an input, the actual input to make the thought happen, and the resulting output in the game. Any delay introduced into this pipeline is considered a break in immersion and attention. Focusing on only that is a challenge that is hard enough and we’ve certainly come a long way. But something like this Rift is setting us back a generation in latency, one of the most overlooked aspects of immersion. So in effect what they’re building is just a Kinect for your head.Humans are able to translate emotions and impulses as well as “control” directions almost instantaneously into their nervous system and is measurable down to the fingertips. The joystick, mouse and keyboard as we know it are simply a very crude tool for utilizing those fine, almost microscopic connections in grand, bland motion gestures. The next major step in the right direction is an evolution of this called biometrics. It’s no surprise to me that Valve seems to be very very interested in this… It will be the next “gravity gun.”In terms of motor skills, the head is a very poor tool to utilize as an input device. Just ask anyone to turn their head fast and they have to think twice to prevent tweaking their neck. However, our fingers are fare more evolved, far more nimble and more capable of a wide range of gestures, subtleties and nuances.In my opinion the magic bullet for getting rid of control friction is setting standards, standards that only a console can really enforce with standardized hardware. Such standards would be

All of this is achievable today and should be realized but developers and hardware makers are getting lazy. In fact this kind of performance was closer to reality when CRT monitors refreshed in less than one millisecond, such responsiveness spawned the action / shooter genre and paved the way for companies like ID, Valve and Epic.Only once frictionless control has been achieved should VR be introduced without compromise into something like the Oculus Rift, because we’re drifting farther and farther away from the point.